The story behind the Music- and StoryBall 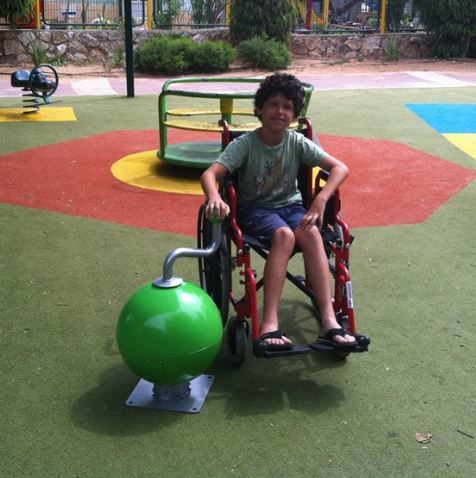 As I started my new job as an interactive playground designer I understood I needed to do thorough research. It was a while ago that I played myself in a playground. So I decided to visit different kinds of playgrounds to observe kids and parents while playing. It looked like everyone was enjoying themselves. I started to talk to some people about their experience and most of the people I spoke to were happy with the different playground installation.

While talking to a father with a little girl I saw another girl in a wheelchair. Her father was lifting her out of the wheelchair, and putting her on one of the accessible swings. My first thought was “How wonderful that she can play and enjoy herself in the playground as well”. I decided not to approach the family and instead I observed her for a while. She looked happy. Her father stayed next to her helping her to swing. She noticed I was watching her and then she smiled to me. I decided to approach her.

She was really happy I came over to her, and she started talking. Her father asked me what I was doing at the playground, as I didn’t come with any kids. I explained that I just got a new job as a playground designer and that I was watching the kids playing in order to get a sense of the different experiences of the kids. I asked the girl if she liked the swing. She was silent for a minute and then said “It’s alright”, her smile disappeared for a while and she just stared at the other kids running around the playground. I said: “You don’t look too happy with the swing, what is wrong? She said: “I’m happy with the swing, it is nice to be outside and play… but I’m always alone, no one is playing with me”. She was silent for a few seconds, hesitating to continue. I said. “I’’m going to design new playground installations I want you to be able to play with it as well. Can you help me?” She nodded. I said: “I want you to tell me what you are missing at the playground. Explain me what you would like.” The girl and her father were very helpful and opened my eyes. They told me that they really appreciate the efforts of different playground areas with accessible playground equipment and they told me that things have been improved the last few years. However they both explained to me that a lot of accessible playground equipment isn’t really accessible, or is half accessible as they called it.

“Take for example the swing” the father told me “I always have to lift her from the wheelchair into the swing, there is no way she can do that by herself”. The girl continued “I want to be independent like the other kids, they don’t need their parents to swing or slide. I always need my parents”. It was really interesting to me because when I first observed them I was so happy for them they could also play at the playground, now I understood there are more challenges than I was first aware of. The girl continued “What I miss the most is that I always play by myself, if I swing I look from a distance to the other kids running around having fun. I’m never part of their game. I see kids play all kinds of games together and I’m always the outsider”. At that point she had tears in her eyes. And I understood I my new challenge. I asked the father if I could get their phone number and I promised them that I would design something for kids in wheelchairs, some kind of thing where kids don’t need the help of their parents, so they can be independent. An installation which enable kids in wheelchairs to play together with other kids, so they won’t be an outsider anymore but a participant. They thanked me and we went our separate ways.

Back at the office I did some brainstorming with a few of my colleges which was helpful as well, I was determined to design a real accessible playground installation. I started to make some drawings but realized it is a hard challenge. I came up with some ideas but most of the time the kid in the wheelchair still needed help. Then after a few weeks of thinking and brainstorming I came up with the idea. I thought about the music box I had when I was little. Wouldn’t it be great to make one for the playground? After lots of drawings, the idea of the Story/Music ball was born. After a few months the prototype of the Story/Music ball was ready. 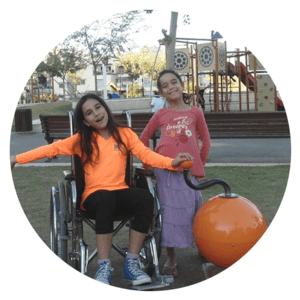 I decided to invite the girl and her parents to the factory. She managed to approach the installation by herself, took the crank in her hand and moved it, then the ball started to play music. She smiled sang along with the music and her parents started dancing around it. This was the moment I understood that my mission was accomplished. This was indeed an installation that kids in wheelchairs can use by themselves, and interact with other kids. The Music- and StoryBall gives the kid in the wheelchair the place he or she deserves. The kid can be the center of the game, the one who is making the music while other kids can play along. The perfect installation for any accessible playground!

Epilogue
The first series of the Music- and StoryBall were made in a way that the user needed to move the crank 360 degrees around. We noticed that this was too difficult for many wheelchair users so we decided to redesign this part of the product. With the new design, just a slight movement of the crank forth and back generates enough electricity to activate the ball. This is exactly the same movement wheelchair users make when moving the wheel of their wheelchair. Problem solved!