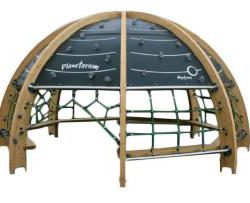 Play Planetarium and the Whisper Catchers for the Astronomy Lab in Texas.

Located south of the Texas Medical Center, Meridiana is a brand new community with residential and commercial development and three on-site schools. Within Meridiana parks have been developed, both for the use of the community and at the same time catering the local schools according to their curriculum. Around the local water retention basins a trail of learning loops has been realized. Within the first phase three learning labs are being developed; the Astronomy Lab, the Lake Habitat and the Force/Motion/Energy Lab.

Eduplaying is honored to be part of the Meridiana project and supplied the Play Planetarium and the Whisper Catchers for the Astronomy Lab.